HomeblogDevOpsX-ray, Application Performance Management and Finding a Bullet in the Body of a President

X-ray, Application Performance Management and Finding a Bullet in the Body of a President

Just picture practicing medicine without X-ray! I caught myself using this metaphor when trying to bring home to clients the need to add application performance monitoring to their arsenal of performance testing tools.

Indeed the ability of modern APM tools to trace complete user transactions from any user device through the bowels of the application to database seemed like a good justification for such a comparison. Now, when we add to this ability to build a picture that represents transactions and tiers visually, the analogy  becomes quite convincing.

CT Scan of a brain (Wikipedia). 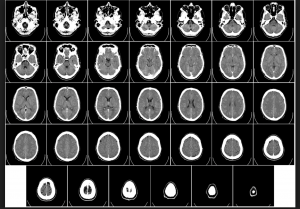 Nevertheless I found out that this comparison does not work for everyone. My wife does not like it.

“Please let doctors alone,”  pleads with me my wife  when I volunteer such parallels between the humble IT and the lofty field of medicine in presence of friends physicians.

“They don’t like your examples,” my wife continues, “they think about themselves as a caste apart.”

This might be so, but I wanted to explore the history of how the practice of medicine looked before the introduction of X-ray technology.

My decision  to research the X-ray example brought me via Google to a fine blog post by Dr. Richard Gunderman on this very topic. The blog in turn lead me to Dr. Gunderman’s  book: X-Ray Vision,The Evolution of Medical Imaging and Its Human Significance.

I recommend that you read the blog, and the book. Meanwhile here a few memorable facts from this blog — X-ray is fairly recent. Dr. Gunderman’s post was written in 2015 to celebrate 120 years anniversary of the invention of the technology in 1895 by Wilhelm Roentgen.

It is remarkable that by the beginning of 20 century the practice of medicine without X-ray was already unthinkable. X-ray transformed whole classes of diseases and trauma cases by making them routinely treatable and curable.

Imagine if had been invented a mere 20 years or so earlier? History as we know it may have been rewritten.

Dr. Gunderman tells the story of President Garfield who could not be saved in 1881, after being wounded by an assassin;  physicians were unable to locate the bullet in his body. The only technique available to them at the time was manual probing which was painful to the patient, dangerous due to possible infection, and ultimately not effective.

Dr. Gunderman states that today in US alone there are 30,000 radiologists and 220,000 radiology technicians.  When talking about X-ray based CT, Gunderman observes in the blog:

CT scans now play a huge role in medical diagnosis. One recent study in a major emergency department showed that after a CT scan of the chest, the treating doctor’s leading diagnosis changes 42% of the time, and after a CT scan of the abdomen it changes 51% of the time. This is testament to the huge impact of X-ray technology on how medicine is practiced, sparing many patients unnecessary surgery and getting urgent treatment to others faster than would otherwise be possible.

When leading internists in the US were challenged to name the medical innovations without which it would be most difficult to imagine practicing medicine, CT scanning received the greatest number of votes by far.

I believe that the effect of Application Performance Monitoring tools with their ability to collect millions of events across the application and infrastructure tiers, and build an accurate picture of ongoing, real time, or past system activity, is of the same magnitude.

Today’s applications are complex. They often consist of myriads of components and services distributed across multiple tiers and hybrid infrastructure.

At the same time, as in pre-Xray medicine, It is not uncommon for developers, management, and operation teams to treat applications as big black boxes without ever being able to look inside.

This might be fine until something is going wrong and there is a production issue keeping users dismayed and CIOs awake at night.

This is where APM tools come to rescue, just like X-ray and CT in the emergency room.

Visualization of diagnostics and ability to quickly travel from top level down and back, allows to diagnose problems and provide remediation teams with actionable information in real time. In short, to find the bullet in the body of an application as soon as needed.

Is it too bold a statement? After all, in case of the use of X-ray and CT in the medical field we are talking about human lives. When discussing APM we are dealing with mere IT.

Reality check: “mere” IT powers our infrastructure, transportation, health care, financial institutions, and yes, elections. In the current state of our society, with its almost total dependency on IT infrastructure, we must have handy diagnostic technologies which enable us to diagnose and cure, and  keep our IT systems robust and healthy.

Application Performance Monitoring tools belong to this vital category. Think about it — driving performance test load at the system and treating it as a black box is IT equivalent of attempting to find a bullet by manually probing the patient.

Diagnostics, whether in the medical field or in the IT engineering, have a common requirement — they need specialists with trained eyes.  Looking at the same images, and the same data points, an expert sees a full picture that  somebody not skilled in the trade would miss. It takes a long time to become an expert and to develop the ability to see the forest for the trees.

Both fields show enormous, practical potential for use of AI.  These are custom made cases for engaging computers to do the heavy lifting of sifting through millions of signals, to apply rules and reasoning, and to produce valuable recommendations. Here are examples of application of AI in the field of medical imaging..

In the APM space, Dynatrace SAAS and Dynatrace Managed is a great example of effective use of AI to automatically detect problems in systems after parsing  thousands and millions of data points. (Full disclosure — Dynatrace is a partner of ours.)

Does it mean that all radiologists and performance experts would need soon to look for jobs in real estate? Not really, armed with AI-equipped tools they will  be able to move to another level of complexity, attack new problems, and grow professionally.

In his well written book, Dr. Gunderman makes a case not only for the possibilities of diagnostics technologies, but also for the limitations of any particular technology on its own.

At the end of the day, the real solution comes only from people working together, communicating, making decisions, solving problems, saving projects and lives. This applies to medicine and the world of IT alike.

Finally,  after all, I found a physician who likes my comparisons of IT and medicine. It is my mom.

After having worked for 40 years in a Soviet hospital as a pathologist she finds my talk about diagnosis and postmortems interesting and relevant.